Over the last week, we’ve seen two articles take a deeper look at think tanks and their ties to corporate donors and right-wing influence peddlers. The New York Times’ article “Think Tank Scholar or Corporate Consultant? It Depends on the Day” examined at length on how corporations pay scholars and “non-residential scholars” to shape policies that are very profitable for corporations. They do this under the guise of independent analysis. Vox took a deeper dive shining light on how the Koch Brothers have built powerful right-wing networks at the state level to drive extreme policies aimed at defunding labor unions, thwarting national policies to help working families, and produce media commentary designed to push a narrative that benefits their corporate funders.

The article exposed how these networks operate together to create a political force. From the article:

“The right-wing networks are a well-oiled machine: ALEC pushes proposals within state legislatures; the State Policy Network builds the intellectual and policy case for those bills; Americans for Prosperity then generates outside political pressure through ads and grassroots organizing.”

Pennsylvania is an example of this state network at work. The Commonwealth Foundation, often labeled in the press as a “free market think tank,” has been a constant feature in our budget negotiations and our press, continually pushing an anti-union agenda. This isn’t a product of their love of free markets. As the Vox article spells out, it’s a product of their end goal – defunding labor unions and progressive organizations and silencing the working class. You don’t have to take Vox’s word for it however. You can see what The Commonwealth Foundation’s said about it themselves. They spelled it out in their 2013 fundraising letter with their “Project Goliath,” an attempt to slay unions as they put it.

Look at recent commentary in Pottstown Mercury, Phillydotcom, the Reading Eagle, and PennLive. All have a member of the Commonwealth Foundation’s leadership talking about the need to cut worker’s retirement security. ALEC’s website has an entire section related to “pension reform.” The state affiliate for Americans for Prosperity has also continually applied pressure around pensions to state lawmakers. Recently, Speaker Mike Turzai published an OpEd calling for the same thing.

We can’t continue to let this operate in Pennsylvania without shining a spotlight on it. It’s important to understand the effort to cut retirement security isn’t driven by Pennsylvanians, but by a coordinated efforts of organizations with ulterior motives.

Continue to watch this space. 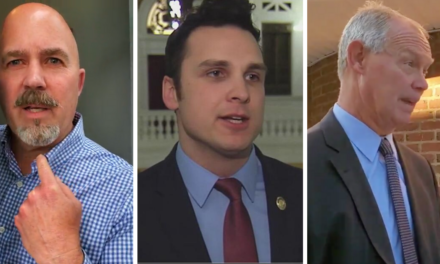