PA Spotlight has uncovered that State Representatives Andrew Lewis in the 105th and Barb Gleim in the 199th, and State Senator John DiSanto in the 15th financially benefited from the Paycheck Protection Program. These three central Pennsylvania legislators spent the pandemic pushing the Commonwealth Foundation’s agenda to reopen Pennsylvania unsafely and hypocritically voted against protections when it came to frontline workers. In response to their behavior, Matt Brouillette’s Commonwealth Leaders PAC are using their PAC to support their re-election efforts and The Commonwealth Foundation are running thank you advertisements for their votes.

State Representative Andrew Lewis went viral on more than one occasion during the pandemic. Representative Lewis contracted COVID-19 and didn’t disclose that he had the virus to his colleagues. Earlier in the shutdown, Rep. Lewis gave an impassioned speech supporting legislation that would reopen construction businesses across the commonwealth. Sounds appropriate since Representative Lewis holds financial interests in multiple construction companies. Documents from the Pennsylvania State Ethics Commission show that Rep. Lewis serves as a “senior advisor” for the Tradesman Building Group LLC, who received a PPP loan between $150,000 and $300,000.

A long-time ally of the Commonwealth Foundation and a Harrisburg area real-estate developer, Senator John DiSanto, received between $1 to $2 million for Triple Crown Enterprises, a company he co-owns with his family. Statements of financial interest state that Senator DiSanto is still collecting income from the business. When the General Assembly was getting ready to pass bills to reopen in April, Senator DiSanto blamed Governor Wolf for forcing 1.3 million Pennsylvanians out of work.

And then there’s State Representative Barb Gleim, whose family-owned construction company received between a $1 to $2 million loan. When Rep. Gleim ran for her current seat in 2017, she served as an assistant secretary for John W Gleim, Jr. Inc, who was the beneficiary of the PPP loan. Representative Gleim’s LinkedIn account lists her as the company’s Director of Business Development and the Director of Operations. During the shutdown, Representative Gleim called the reopen protests “freedom of speech,” and claimed that Governor Wolf never inspired hope. 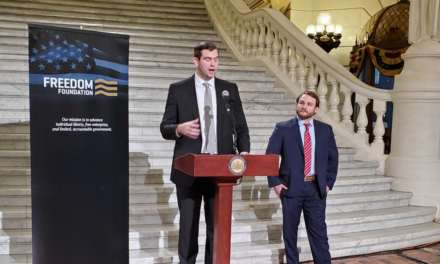