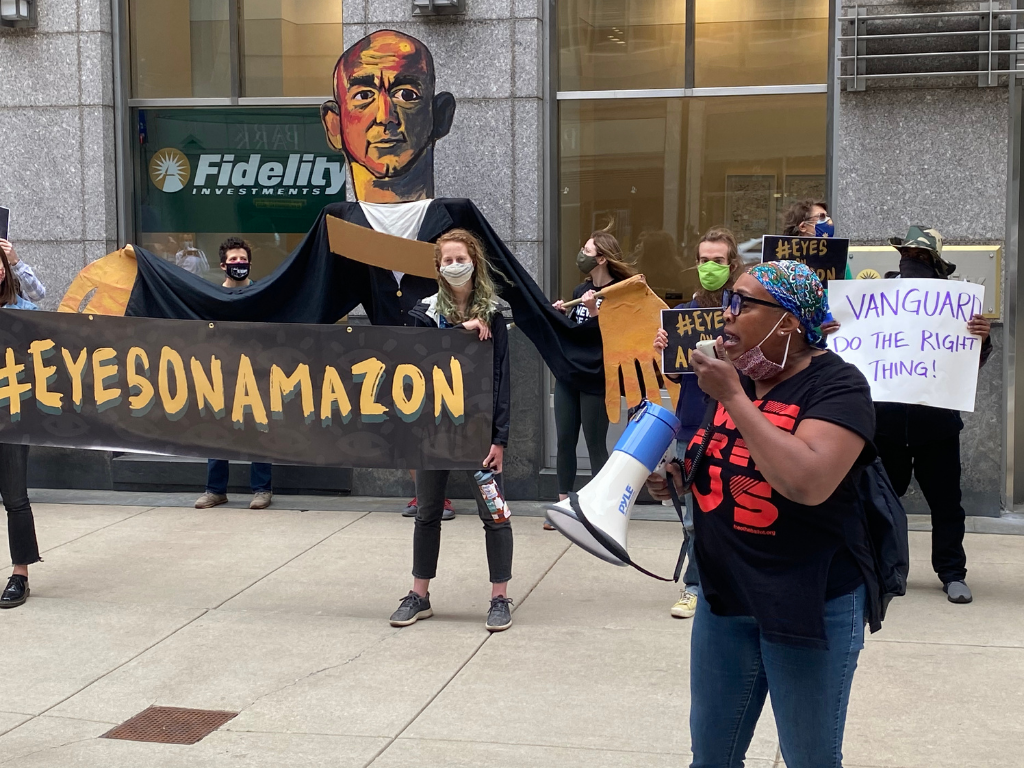 In the days leading up to Amazon’s Wednesday shareholder meeting, activists across the country held actions demanding racial, economic, and environmental justice within the company. Activists staged events in front of the office buildings of shareholders like BlackRock, Fidelity, T. Rowe Price, Vanguard Group, and others putting pressure on the powerful corporations to match their statements of commitments to racial equity to their actions as shareholders of Amazon.

The activists erected a 20-foot wide Jeff Bezos puppet with a union buster-in-chief sign as passersby honked their horns in solidarity with the action. After leading a series of chants and gathering a crowd in front of the building, a series of speakers gave remarks about the local impact of Amazon in Philadelphia, including Tonya Bah from Free The Ballot and Stephen Drain of Pennsylvania Working Families Party. Of the event, Bah said, “If you want to know why we are standing here it’s because Amazon is trying to destroy the Black and Brown communities it says it supports.“

Drain, a lifelong Southwest Philadelphia resident, addressed the recently announced Amazon warehouse that outbid a long-planned expansion of public transit in his community. He stated, “This is what was developed and promised with community support, unlike the Amazon site.” Explaining both the environmental impacts of the warehouse and lack of community input, he added, “Not only have our politicians failed us in Southwest Philly by allowing Amazon to steamroll through, they have also damned our communities to go on without proper public transportation. This is Amazon we’re talking about; a union-busting entity,” underscoring what was at stake in the surprise announcement and support it received from local politicians.

The group delivered a set of community demands to Fidelity Vice President Seán Huggins, outlining a series of votes they would be watching. While they were not let in the building, security guards promised they would deliver the petition ahead of Wednesday’s vote.