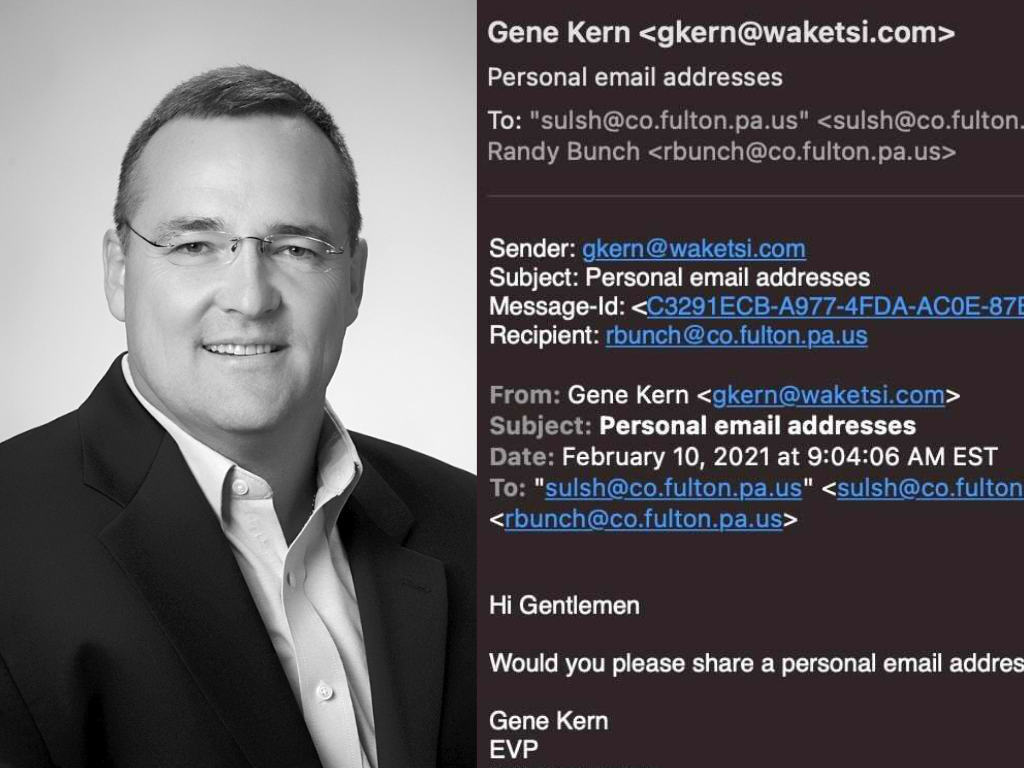 In emails obtained by PA Spotlight, we are shedding new light on the efforts Wake TSI and owner Gene Kern took to keep their efforts to coordinate with the Fulton County Commissioners to conduct a scam election review at the behest of Senator Doug Mastriano a secret. It has been reported by PA Spotlight that Sen. Mastriano contacted various counties with independent requests to audit voting machines dating back to before the January 6th insurrection.

In an email being released with the subject line “Personal Email Address,” Kern asks Commissioners Randy Bunch and Stuart Ulsh on February 10, 2021 for their non-government email addresses. This would essentially make any communications about their potential audit at the request of Senator Mastriano hidden from Pennsylvania’s sunshine laws.

Then in April, when reporters from the Arizona Mirror and Talking Points Memo caught wind of the connections between Gene Kern’s Fulton County and Arizona audits and began asking questions about Fulton County’s final report, Fulton County CDBG Coordinator Patti Hess emailed Kern and Commissioner Ulsh expressing concern she has no answers for the incoming press questions she is receiving. She continues, “I am just letting you know I don’t want to say something wrong.”

Kern responds to Hess and Commissioner Ulsh stating, “We are not allowed to speak to the press or make comments on the project.”

Commissioner Ulsh recently testified by invitation of Senator Cris Dush on the ongoing election hearings hosted by the Senate Republican caucus. In the hearing, questioning from Senator Vincent Hughes referenced our reporting on the emails between Fulton County Commissioner Stuart Ulsh and fellow committee members seeking to overturn the 2020 election results. Senator Dush cut off the mics at the hearing and shut down that line of questioning from Senator Hughes.

Our exclusive reporting is made possible thanks to the support of readers like you. If you value this reporting, chip in today.