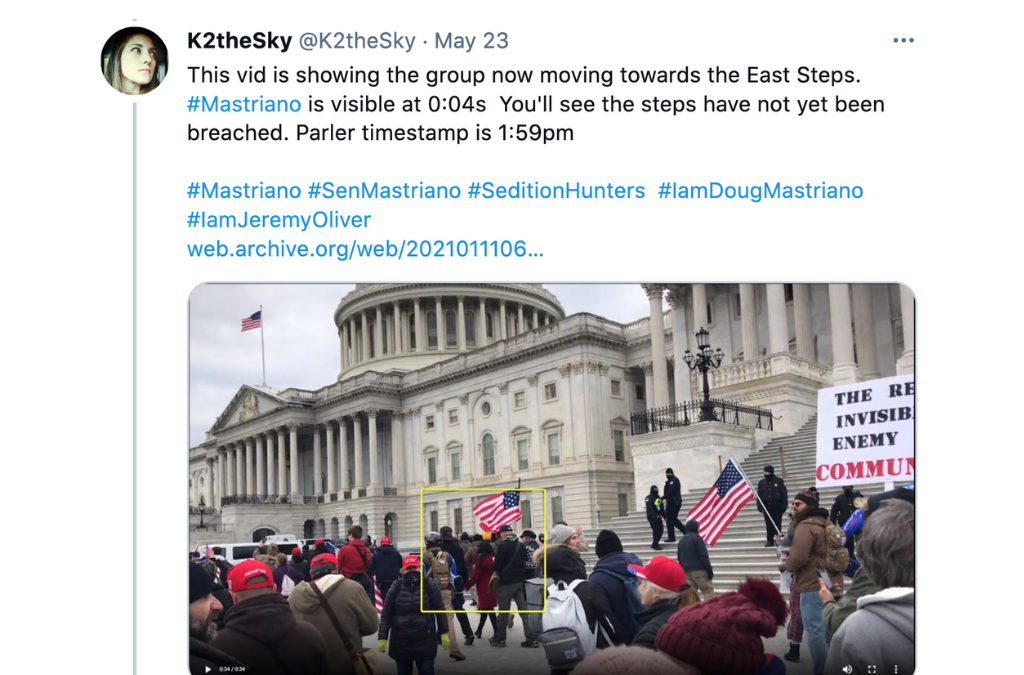 A series of photos and screenshots dug up by #SeditionHunters have placed Senator Doug Mastriano feet from the United States Capitol minutes before it was breached on January 6th.  #SeditionHunters is a group of citizen investigators who have been working to hold participants of the insurrection accountable by identifying them in video and photos taken during the insurrection. This new evidence undermines what Senator Mastriano told Senate Republican Leadership about his participation in the insurrection.

Screenshots of Senator Mastriano and his wife breaching a police barricade and walking on the North West Lawn of the Capitol grounds emerged over the weekend. PA Spotlight has previously uncovered that Senator Mastriano witnessed the first breaches of the Capitol in a little-known right-wing interview just days after January 6th. This sparked further interest by the #SeditionHunters to pinpoint his exact location. Parler footage from Propublica’s database that is time-stamped at 1:59 PM shows Senator Mastriano and his wife walking towards the main set of stairs that insurrectionists breached at 2:06 PM.

Mastriano admitted to witnessing the initial breaches at the United States Capitol and called those ripping the barricades down as “agitators.”  In the interview, Mastriano said that the people breaching the Capitol “was not our crowd.”  It turns out, this was Senator Mastriano’s crowd. These new photos also offer a convincing case that Senator Mastriano was aware he breached a police line counter to his initial claims. Additional images also popped up this weekend showing Senator Mastriano posing for a picture with targets of the FBI investigation dating back to November of 2020.