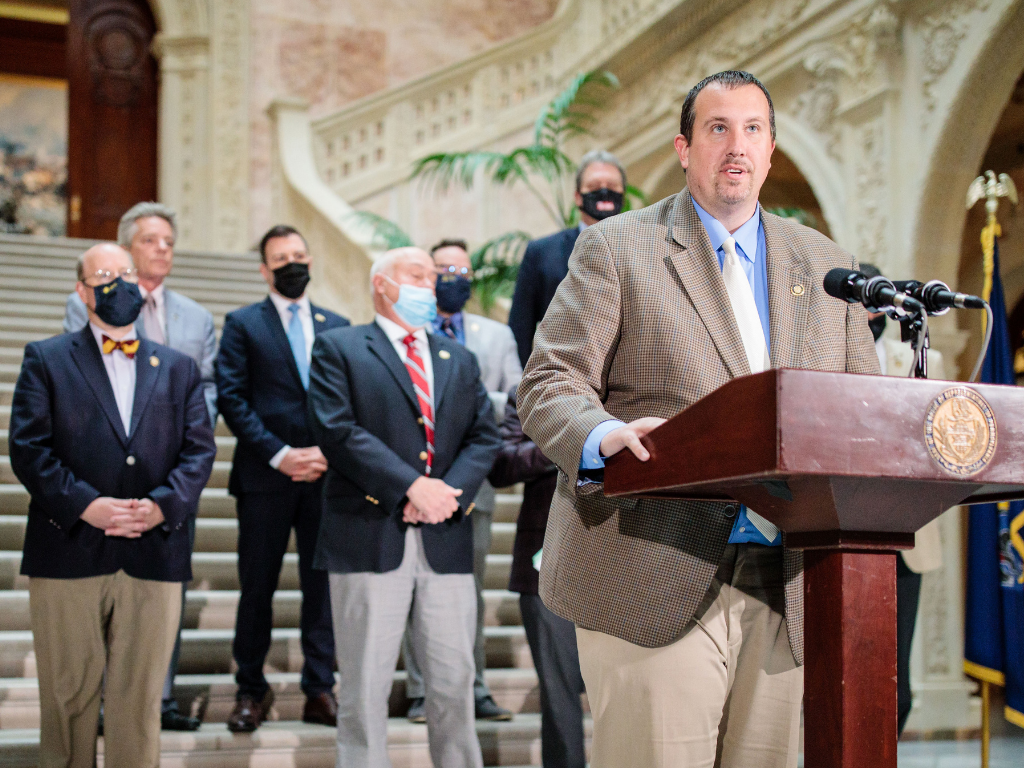 This month, the Pennsylvania House State Government Committee finished their “election integrity” hearings litigating the 2020 election. The marathon dog and pony show held by Committee Chairman Seth Grove had ten hearings that spanned two months. They included an array of Koch-funded operatives spreading disinformation and lies about the 2020 election. Now that the hearings are finally over, let’s take a minute to recap what happened at these hearings.

All legislation to suppress voting rights in Pennsylvania will move through Representative Seth Grove’s House State Government Committee. As previously highlighted by PA Spotlight, Representative Grove sits on the Board of Directors with the American Legislative Exchange Council and is a member of the “process working group.” It was formed in 2019 to develop corporate-backed policy to enable gerrymandering and deny people access to the ballot box. Following the 2020 election, Grove registered to attend a December ALEC meeting with state legislators from around the country and employees with numerous billionaire-funded front groups, including the Heritage Foundation, the Public Interest Legal Foundation, and the Council for National Policy.

As Representative Grove’s election hearings were coming to an end, Representative Grove, Representative Metcalfe, and several House and Senate Republicans met with former Kansas Secretary of State Kris Kobach. Kobach spewed right-wing election lies and conspiracy theories following the 2016 election and in the lead up to the 2020 election. Grove’s final election hearings included Hans von Spakovsky from the Heritage Foundation and J. Christian Adams from the Public Interest Legal Foundation, both of whom were profiled with Kris Kobach in The Guardian for playing a role in spreading Trump’s Big Election Lies that resulted in a deadly insurrection.

Other billionaire-backed dark money groups participating in Representative Grove’s charade to suppress Pennsylvania voters included the Capital Research Center, the Foundation for Government Accountability, the Honest Elections Project, and the Opportunity Solutions Project. These operatives consistently repeated the “easy to vote, hard to cheat” one-liner while spreading lies about voter IDs and the influence Facebook CEO Mark Zuckerberg had on the 2020 election. Scott Walter from the Capital Research Center claimed that Mark Zuckerberg “privatized” Pennsylvania’s election through non-profit grants that allowed county officials to operate the election. Walter went on to claim the Facebook CEO manipulated the outcomes of the Georgia and Pennsylvania election results.

John Bechtle from the Opportunity Solutions Project compared the rulings that the Pennsylvania Supreme Court handed down before the election to changing the rules to a football game minutes before it begins. He said, “it’s like if the NFL sent out a ruling an hour before a game in November saying that teams get five tries for a first down instead of four.” These organizations proposed changes to Pennsylvania’s vote-by-mail system calling for limiting how many drop-boxes a county is allowed to have and called for implementation for voter ID.

In an exchange with Chairwoman Margo Davidson, Jason Snead from the Honest Elections Project stated that voter IDs do not have a discriminatory impact and claimed that 77 percent of Americans want voter IDs, including majorities of Black and Latino communities.

On April 21st, Representative Grove and Republicans from the House State Government Committee released their findings from the election hearings. In it, they advocated for purging voter rolls, photo IDs for in-person voting and voting by mail, and limiting the ability of counties to meet the needs of their electorates. There was no mention of pre-canvassing, which has bipartisan support in the House.

In a statement issued by Representatives Margo Davidson and Ryan Bizzarro, Chairwoman Davidson stated that “Republicans are ignoring at least three bipartisan proposals to improve Pennsylvania’s elections process to focus on hyper-partisan voter suppression initiatives like voter ID based on false claims of election fraud.”

It’s no surprise Representative Grove came up with the conclusions he did. The organizations he relied on for testimony are paid to spread misinformation about the voting process. Something that he is well aware of as ALEC’s go-to elections guy in Pennsylvania.