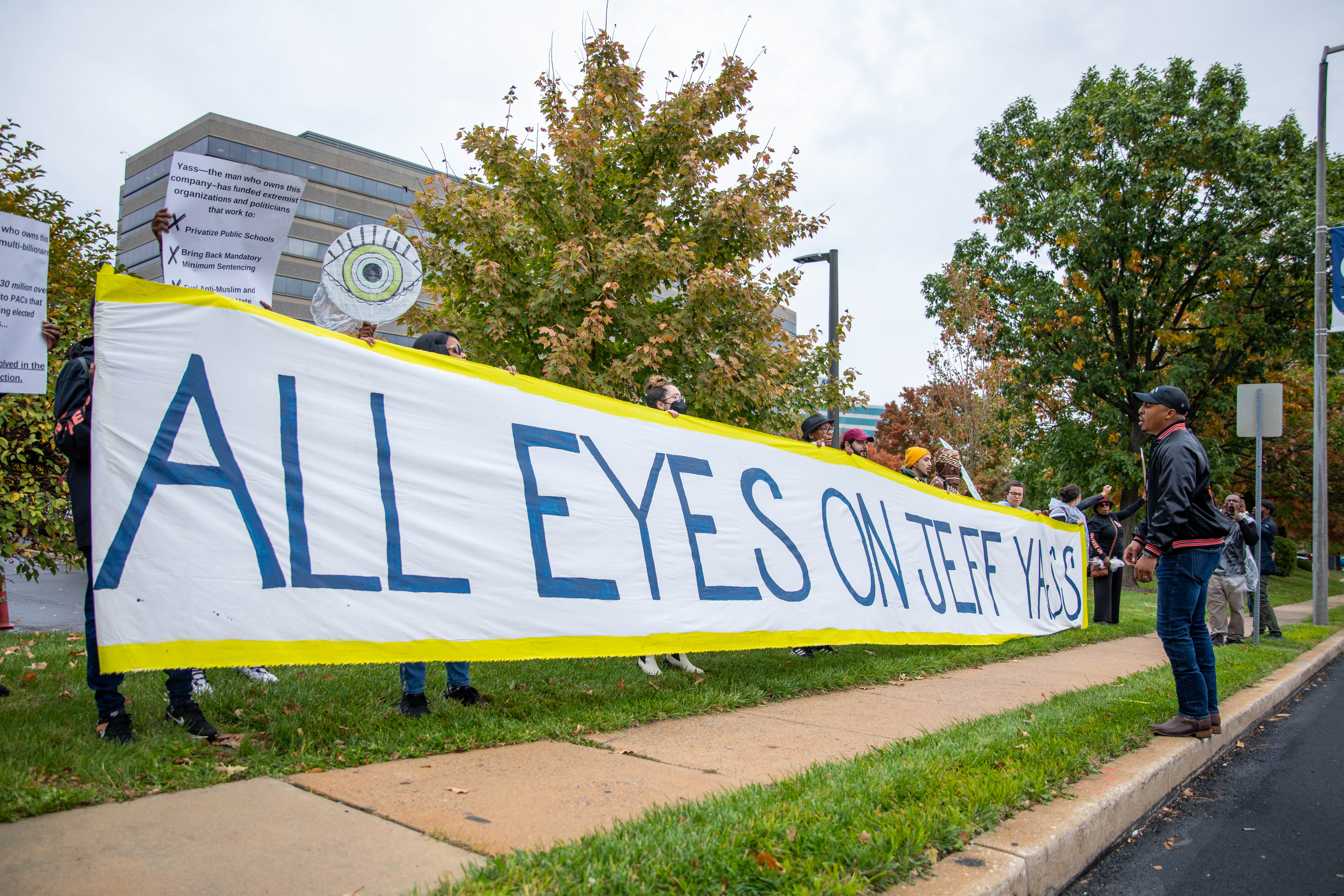 Grassroots organizations, faith leaders, and community members from across Pennsylvania gathered outside of Jeffrey Yass’ house and investment firm to call his political spending harmful for democracy. The protests represent an escalation of action and attention paid to the billionaire’s influence peddling in Pennsylvania.

Activists from the PAYBAC coalition previously reported on by PA Spotlight unfurled a giant banner blocking the entrance of Susquehanna International Group that read #AllEyesOnYass. The rally outside of the headquarters located on City Line Ave was hosted by PA Working Families Party, Reclaim Philadelphia, Make the Road PA, One PA, Jobs with Justice, Tax the Rix PHL and ACRE.

Protestors chanted #TaxThatYass and held signs stating democracy was not for sale. Tonya Bah, a leader with Free the Ballot spoke at the event. “Big money in politics creates legislation that harms us and that’s a problem. As long as Jeffrey Yass’ money can reach out and touch, it will.” Members from Make the Road PA and One PA spoke about what it was like to feel the impact of the billionaire’s political spending in Black and Brown communities.

The action was a kickoff event in a series of actions across Pennsylvania aimed at educating the public about the corrosive influence of billionaire and corporate spending in elections. A new report from NPR showed that $1 billion in dark money has benefitted Republican senate candidates. PA Spotlight recently reported Yass’ is one of the largest donors to a Super PAC that has spent heavily attacking the labor backed John Fetterman.

Yass greeted the activists with a coffee and donut truck. A security guard, who identified themselves as with Yass and the trading firm, told one of the lead organizers the truck was for the protestors on behalf of Yass. None of the protestors took the donuts or coffee while security could be seen getting donuts and coffee throughout the duration of the protest.

Last week, the controversial billionaire was the target of another protest led by POWER as part of a statewide bus tour aimed at calling out those who support Christian nationalism. POWER, an interfaith coalition dedicated to economic, social, and racial justice, parked a bus outside the billionaire’s house in Lower Merion with the tag “This Bus Fights Fascism” and held a press conference calling out the causes he is funding.

Yass is a leading right-wing mega donors having supported QAnon conspiracies and organizations that participated in the insurrection. Yass, through the Commonwealth Leaders Fund, supported Pennsylvania’s gubernatorial candidate Doug Mastriano when he first ran for office in the state senate and is the source of the largest expenditure against Attorney General Josh Shaprio’s gubernatorial campaign this year. The billionaire is the fourth highest donor in federal races this cycle.

Leaders from POWER had a clear message for Yass; they are watching. Rabbi Alissa Wise opened her remarks stating this is the third time she has protested his house and later posted she’ll “keep coming back til he stops using his wealth as a weapon.” Rabbi Linda Holtzmann is offered a prayer from the Jewish tradition for the people hurt by the policies of Yass.

The action included songs, prayers, and remarks from leaders across the faith spectrum. It was led by POWER Director Bishop Dwayne Royster who emceed the event. The action on Yass was the first stop of the day for the bus tour which also included a voter registration drive in North Philadelphia. It will host events throughout Pennsylvania now through the 2022 election. Organizers said that it would not be the only one dedicated to Yass this bus tour.