Activists Demand Accountability for Jeffrey Yass on Eve of Election – And Win! 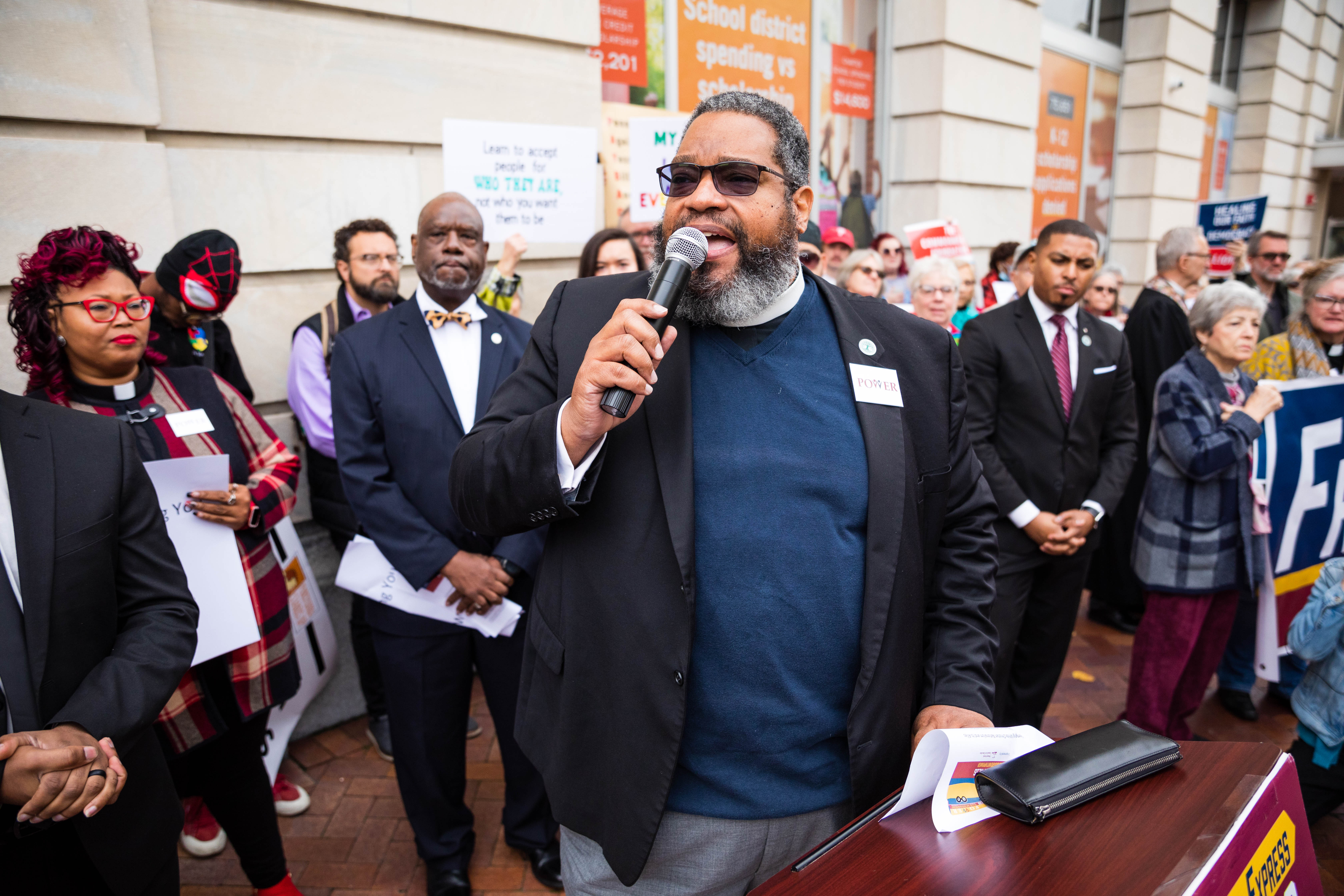 On a chilly Friday morning before this year’s election, over 150 people rallied at the Commonwealth Foundation’s offices citing their connections to Jeffrey Yass. The rally was the final stop for POWER Interfaith’s bus tour highlighting Christian nationalism and was organized in partnership with PA Stands Up. Both organizations are members in the PAYBAC coalition.

Bishop Dwayne Royster emceed the rally, stating that the interfaith leaders were on the bus tour telling “the story about the people funding white Christian nationalism that are using politics as a vehicle to be able to create an idea where there’s a permanent upper class and a permanent underclass.” Religious leaders from a wide array of faith denominations and activists gave remarks detailing how Yass has been peddling division through his political spending to benefit himself, particularly focused on his early support of State Senator Doug Mastriano.

Commonwealth Foundation CEO Charles Mitchell was standing off to the side of the crowd watching the rally when Bishop Royster spotted him. The bishop called him out by name and said religious leaders would be watching him. Mitchell quickly left the crowd as it began chanting “God is watching you” and hurried down the street.

After the event, Kevin Mooney, another staffer for the Commonwealth Foundation, began mingling with the crowd. He handed out his business card to several attendees. Mooney has written numerous hit pieces on organizations who fight for working families. He describes himself as a “investigative journalist” but a review of his work shows he has mostly written for right-wing echo chamber sources.

Yass has drawn numerous protests as the election heated up. Activists held actions outside his home, his trading firm Susquehanna International Group, and now the offices of the Commonwealth Foundation political network. Members from POWER’s Freedom Express bus tour began three weeks earlier outside of Jeffrey Yass’ house in the Philadelphia suburbs. The actions drew support from retail investors on social media under the $bbig money hashtag.

Yass spent millions on the 2022 election cycle. The PACs he funded were the only ones to attack Governor-elect Josh Shapiro in the 2022 election cycle. He also was one of the top donors in a super PAC attacking Senator-elect John Fetterman and was a significant funder in a number of candidates running for the state legislature. His political interventions were largely unsuccessful in 2022. He was also a significant funder of the Club for Growth which supported dozens of election conspiracy theorists.

His efforts were largely unsuccessful in Pennsylvania this year.