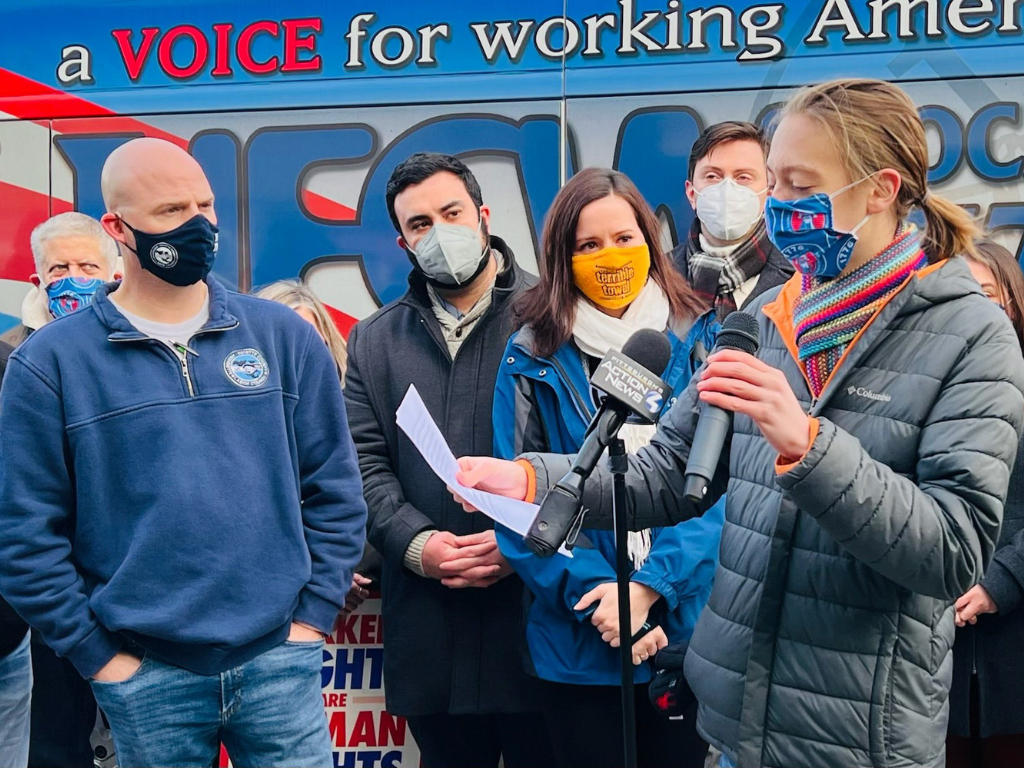 Solidarity is a verb and it was on full display in Pittsburgh Wednesday morning.

Workers from Coffee Tree Roasters held a press conference with labor leaders and elected officials from around Pittsburgh and Pennsylvania to support Liam Tinker. Tinker was fired via text message after being featured prominently in a video announcing the formation of a union at the coffee company with UFCW Local 1776.

The retaliation drew swift condemnation from incoming Pittsburgh Mayor Ed Gainey. Mayor Gainey called Pittsburgh a union city saying, “every worker in Pittsburgh deserves the right to organize a union without retaliation or interference from management.” The morning of the press conference, he stopped at the coffee shop to order coffee and declare his ongoing support for the workers who took the brave steps to demand better working conditions.

CommUnity Good Morning 🌞
If you need a cup of coffee make sure to stop by Coffee Tree Roasters and support the workers of @coffeetreeunion! Yesterday I stopped by and want to thank the staff for their incredible service, kindness, and will to fight for a seat at the table. pic.twitter.com/kcJTZCEDMy

Coffee Tree Roasters employees Helene Tracey and Jordy Vargas shared their experiences working for the coffee chain. Tracey said that workers often go 8 hours without a lunch break, are perpetually understaffed, and only get breaks on the job when it’s to meet with outside union busters. Vargas shared how workers sympathetic to the union faced intimidation from family members related to the coffee shop’s owner. According to Vargas, the owner’s sister and their husband walked into their location to record and harass workers by taking videos with their cell phone cameras.

Tinker spoke at the event and recalled how coworkers started organizing a union over the summer. Tinker started working at Coffee Tree Roasters in the Spring of 2021 and quickly became one of the longest-tenured baristas at the coffee shop because of the high volume of turnover. State Senator Lindsey Williams spoke after Liam and shared her similar experiences.

Senator Williams was previously fired from the National Whistleblowers Center for forming a staff union and went on to work with the International Brotherhood of Teamsters and the Pittsburgh Federation of Teachers before getting elected to the Pennsylvania Senate. The Senator told the crowd that she was fired from that job through a voicemail.

Lt. Governor John Fetterman spoke towards the end of the event sipping a cup of coffee and asked everyone “what would go better with coffee?” He responded to his question by saying “A union. A union goes great with a good cup of coffee…A union makes every workplace better.  That’s a fact. You should not lose your job, your livelihood in the middle of a pandemic because you want to organize. That’s a fact.”

The organizing at Coffee Tree Roasters is one of a string of recent victories from workers at UFCW Local 1776. The local also recently announced the successful organizing at Curaleaf, a medical marijuana shop located in Philadelphia.