Jeffrey Yass and Donald Trump at Odds In #PAGov 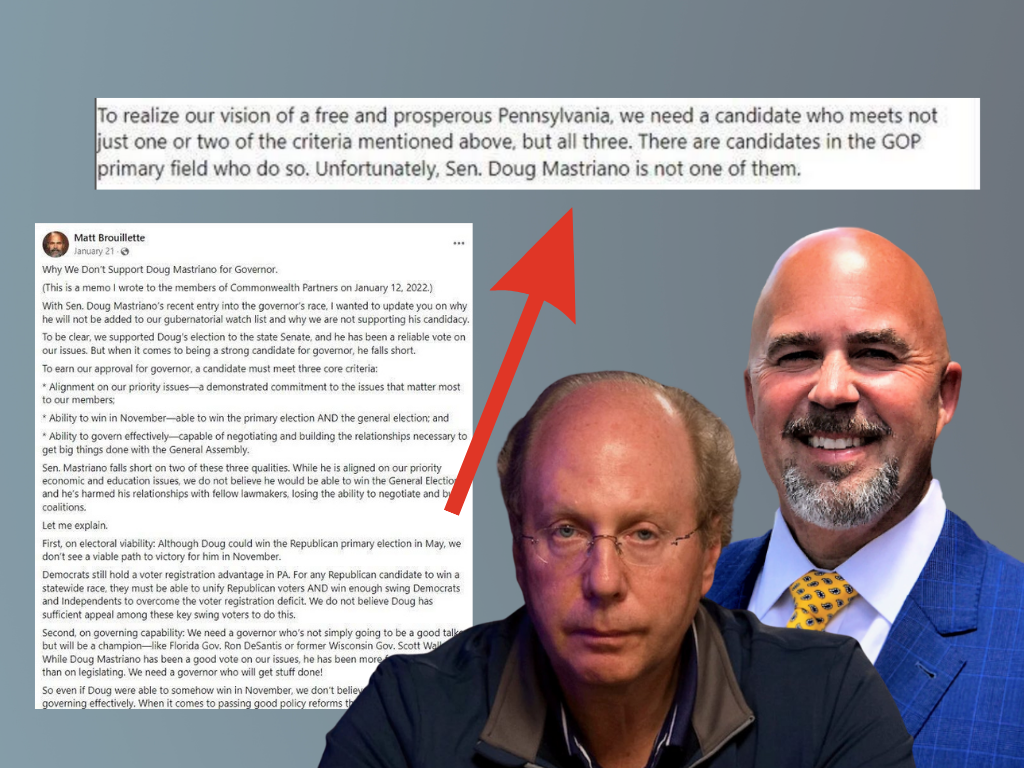 Last week, former President Donald Trump issued an anti-endorsement of Bill McSwain that made headlines across the state. Shortly after, it was also reported that Trump encouraged Jake Corman who was slated to drop out of the race to stay in. It was a late April surprise by the former President that shook up the race for Pennsylvania Governor.

This is a notable development in the contested race. McSwain has enjoyed the support of Pennsylvania Republican mega-donor Jeffrey Yass through a series of PACs connected to the Commonwealth Foundation’s former CEO Matt Brouillette. It also highlighted a growing divide between Yass, who is the 6th richest person in the country, and President Trump.

In response, Brouillette issued a statement claiming that their “commitment to winning in November is unchanged,” despite the President’s anti-endorsement of their preferred candidate. Brouillette’s associated PACs have already spent millions backing McSwain causing at least one Republican to offer an off-the-record comment to the Pennsylvania Capital-Star saying, “You have to wonder who’s running for Governor, Bill McSwain or Commonwealth Partners?”

This isn’t the first time division spilled out in public between Republicans, PACs funded by Jeffrey Yass, and Trump-aligned candidates. In January, Brouillette circulated a memo to members of Commonwealth Partners and publicly about 2022 elections. In the memo, he told Commonwealth Partners members “we need a governor who’s not simply going to be a good talker but will be a champion like Florida Gov. Ron DeSantis or former Wisconsin Gov. Scott Walker.”  Former Governor Scott Walker is infamous for his attacks on public-sector unions in Wisconsin. Florida Governor Ron DeSantis is currently in the news for his ongoing attacks against the LGBTQ community and banning math textbooks over critical race theory.

The memo directly addressed State Senator Doug Mastriano’s candidacy. Brouillette stated that they did not support or consider Mastriano because “we do not believe he would be able to win the General Election and he’s harmed his relationship with fellow lawmakers, losing the ability to negotiate and build coalitions.” Brouillette took the unique step of posting the memo he authored as the CEO of the Commonwealth Partners Chamber of Entrepreneurs to his personal Facebook. It underscores the situation Brouillette finds himself in as he spends Yass’ money and threads the line with the former President. Brouillette previously appeared in an independent film Senator Mastriano put together calling into question the results of the 2020 election and has previously funded campaigns of Senator Mastriano.

Brouillette went on to argue that Doug Mastriano is unable to deliver on policy reforms taking personal aim at the Senator saying, “when it comes to passing good policy reforms that take on sacred cows in the Capitol, relationships matter. Unfortunately, Doug has severely damaged his relationships with many House and Senate members…” Brouillette himself was previously pegged as a right-wing bomb-thrower which played a role in sinking his own political ambitions.

Either way, with the public statements now out there by Brouillette affirming that they would support another candidate if McSwain is not successful, these divisions are likely to grow given the controversy surrounding Yass’ spending and outsized influence in Pennsylvania.