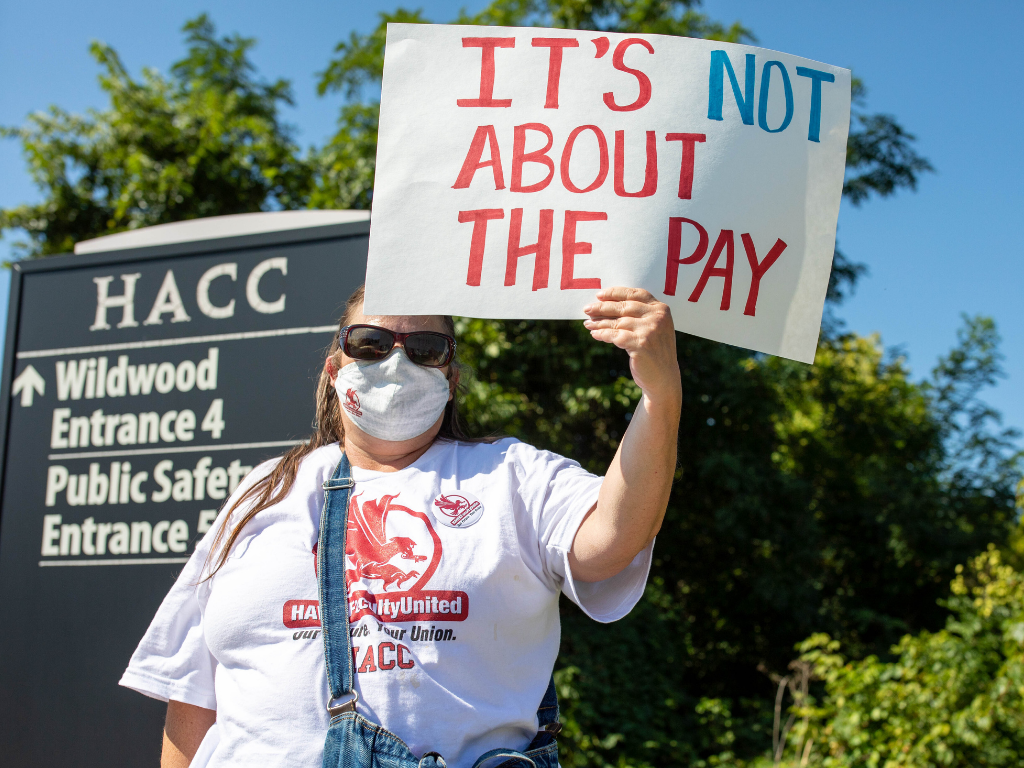 Full-time and adjunct faculty professors at Harrisburg Area Community College are poised to vote in their upcoming union election. The union election at Harrisburg Area Community College will take place from February 24 to April 7. More than 800 full-time and adjunct faculty members from the Harrisburg, Lancaster, Lebanon, Gettysburg, and York campuses will participate in the election and ballots will be counted on April 8, 2022.

Hawk Faculty United have spent the last few years organizing Pennsylvania’s last remaining non-unionized community college and have faced obstruction and anti-union propaganda by HACC’s President Dr. John “Ski” Sygielski and his administration during this process. Faculty members at HACC began collecting union cards in early 2020 and petitioned the Pennsylvania Labor Relations Board for an election on December 24, 2020. Professors at the community college were forced to wait over a year for their election because HACC’s administration was caught inflating their faculty list to make it appear that the union did not obtain enough signatures for an election.

HACC professors were told in a “fast facts” email on authorization cards sent from the administration that signing union cards “gives YOUR VOICE away.” In August 2020, Dr. Ski emailed faculty telling them “over the next couple of weeks we will be sending you information that we hope will show you that you are better off without the union.” Emails like this have continued into 2022.

Dr. Ski started at Mt. Hood Community College in 2008 and immediately generated criticism for placing Al Sigala on leave, the school’s longtime spokesperson who had rooted ties in the area’s Latino communities. Sigala worked at the college for 11 years and was instrumental in doubling the school’s Latino enrollment during his time. The move at the time prompted Junki and Linda Yoshida, who were prominent supporters of the Mt. Hood Community College Foundation, to withdraw their financial support from the school during Dr. Ski’s tenure.

In 2011, Dr. Ski was at the center of a year-long labor dispute at Mt. Hood Community College. Professors at the college spent several months working under an expired contract and held a strike authorization vote in April, 2011. Following the authorization vote, the school threatened to permanently replace any professors who were to participate in the strike.

The faculty responded to the administration’s threat saying, “Quality education is not built overnight; it’s not found by hiring scab labor from online job postings such as Craigslist or rushing to fill an empty classroom with an instructor who is ill-prepared for the job.” Later that month, Sara E. Williams, a mathematics professor and faculty association’s president, told The Chronicle of Higher Education that the college’s administration was “engaging in a destructive pattern of behavior that will serve only to drive students, faculty and staff from our institution.”

Contract negotiations ended that May and a strike was averted with Mt. Hood professors agreeing to a deal that would save the school $3.2 million over three years relative to the prior contract. Dr. Ski eventually stepped down from his position at Mt Hood Community College in June 2011 and started as president of Harrisburg Area Community College in July 2011.