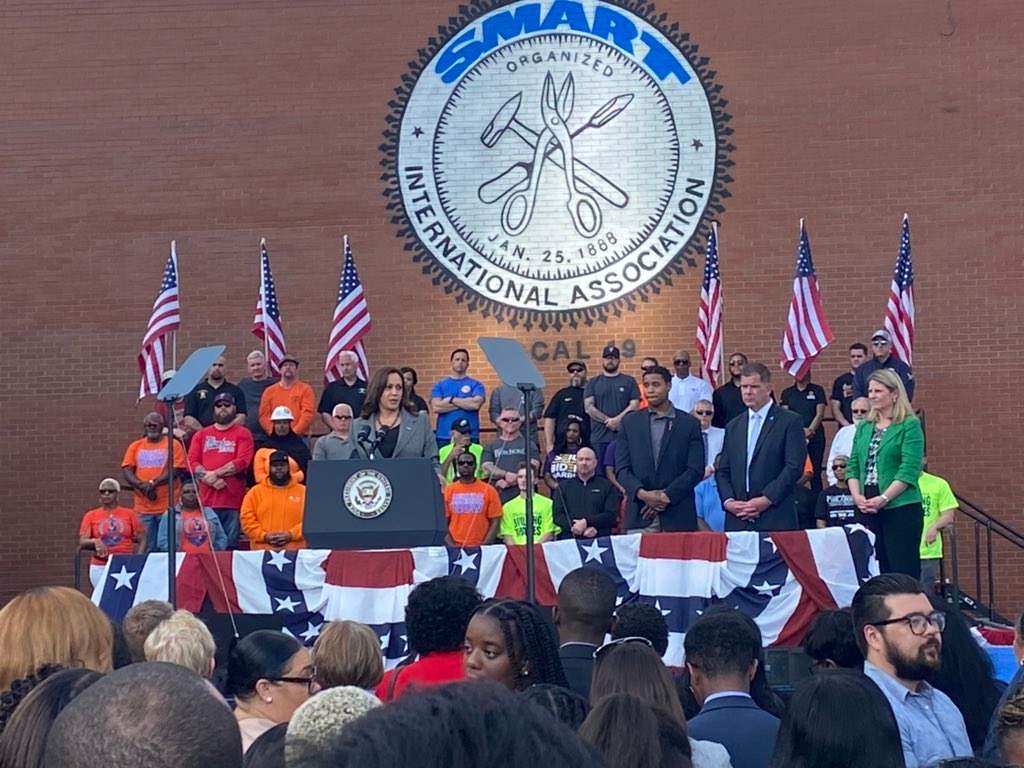 The event was held in part to roll out a new OSHA rule for on-the-job heat protections while also
doubling as a labor rally. Secretary Marty Walsh made the connection between climate change
and the need for these types of pro-workers policies in the building trades. The Secretary was
well received by the crowd of members from a diverse group of organizations including the
Philadelphia AFL-CIO, Steam Fitters Local 19, LIUNA, SMART Union, UFCW Local 1776, SEIU
668, the Philadelphia Federation of Teachers, and many apprentices in the trades.

Williams Griffin III introduced Vice President Harris at the event. Griffin is an apprentice with the
Sheet Metal Workers Local 19 and talked about how the union has changed his life. He stated
about his apprentice,“With fair and competitive wages, outstanding healthcare benefits, and an
amazing retirement plan, my family and I can truly live out the American dream.” Griffin also
touted the education and training he has received from the Sheet Metal Workers local. “Our
local union is less of a membership, and more of a family,”” he said to close out his remarks.

The Vice President echoed Griffin’s remarks saying, “You represent the future of America’s
labor movement and in that movement we are strong.” She discussed how workers organizing
lifts everyone’s wages and how important the house of labor is to the success of the Biden
Administration. She said workers would always have an ally noting that labor unions have been
attacked for decades.

AFL-CIO President Shuler and SMART President Joseph Sellers Jr. both touted the Biden
Administration’s successes on a host of labor fronts. President Shuler noted the reinvigoration in
the labor movement breaking into new industries, specifically touting the first union at Amazon.
Sellers talked about their commitment to diversify the trades and how their leadership at the
NLRB has been vital in returning the agency into the pro-labor voice its role was designed for.

Senator Bob Casey, Congressman Dwight Evans, and Congresswoman Mary Gay Scanlon
were also in attendance. The Pennsylvania delegation of federal officials talked about how we
must ensure that labor turns out the vote in 2022.

Our reporting is a free resource, but if you value the information and news you receive from PA Spotlight, please donate $5 or more today to support our work.