What’s Going on with The Commonwealth Foundation and Philadelphia Inquirer Editorial Board? 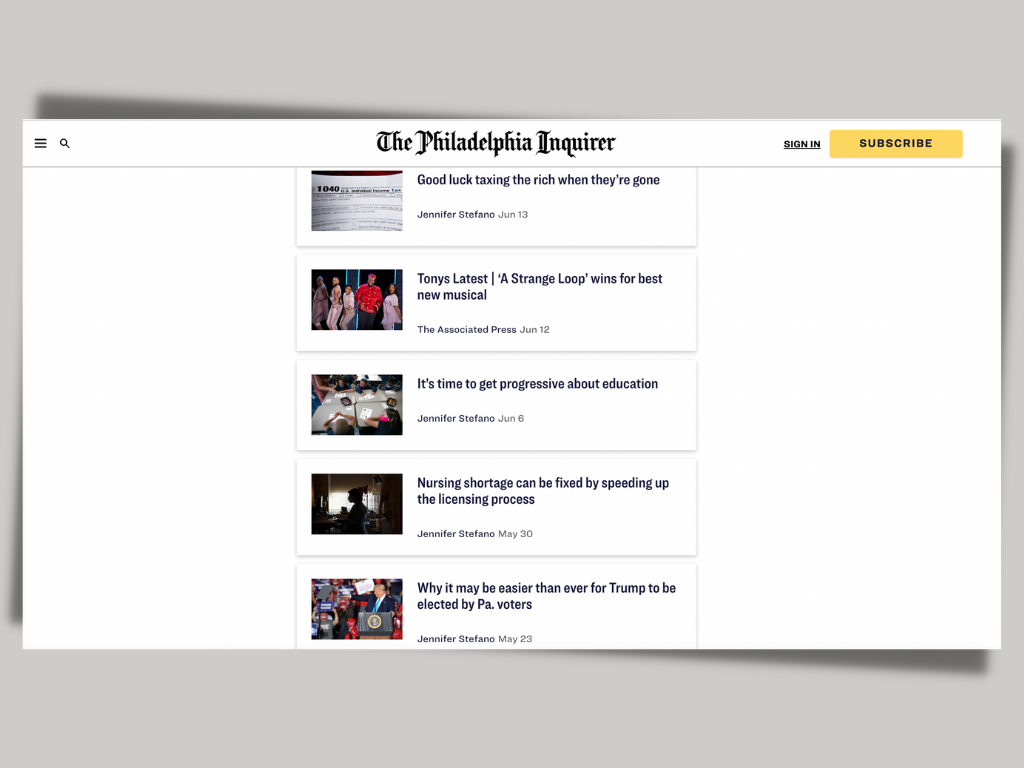 Regular readers of the Philadelphia Inquirer may have noticed something peculiar in the pages of our paper of record lately. Each week, for the last five weeks, readers have gone to inquirer.com or opened up a print edition to find an opinion piece authored by the same person: Jennifer Stefano, an Executive Vice President of the Commonwealth Foundation, a libertarian, rightwing think tank. Seemingly, no one outside organization has gotten to publish with the same regularity—the average reader may even mistake her for a staff writer. But her day job is much more insidious than that of the hard-working reporters and writers who make up the Inquirer: the Commonwealth Foundation is known for their efforts in Harrisburg shifting money from public schools to private ones, fighting to de-fang public sector unions, and working to cut taxes for the rich.

No one believes that the Inquirer or any other paper should only promote opinions from one side of the political spectrum — it’s important to read other perspectives, if only to sharpen our arguments against them. But the frequency with which the Commonwealth Foundation has a microphone for their ideas in Philadelphia’s paper is cause for concern and questions. Philadelphia has nearly 800,000 registered Democrats, and slightly more than 118,000 registered Republicans. Stefano’s most recent piece, published on June 20th, urges state legislators to impeach our democratically elected District Attorney. Maybe Ms. Stefano is unaware, but voters had the opportunity to kick Krasner out of office less than a year ago, in November 2021. Instead, we re-elected him by more than a ⅔ margin in both the primary and general elections. Since Ms. Stefano is a registered voter in Bucks County, it’s understandable that she might not be aware of Philadelphia’s last municipal elections.

Our city is made up of a racially diverse working class who overwhelmingly support fully funded public schools, strong unions, and taxing the rich—all things the Commonwealth Foundation advocates against. The Commonwealth Foundation is not a non-partisan think tank. It is heavily funded by billionaire Jeffrey Yass who has an ideological and class interest to keeping himself as Pennsylvania’s richest man. Jeffrey Yass has fought tooth and nail to avoid paying the taxes he owes to fully fund our communities; he has pushed for (and then used for himself) tax credits for privatization of our public schools. And increasingly, Yass is spending to elect politicians who coincidentally favor policies that will continue to keep him rich.

Despite the feigned purported opposition from the Commonwealth Foundation’s political arm, about Doug Mastriano becoming the Republican nominee for Governor, they are aligned with him on many issues, including support for “school choice” and slashing taxes, and disdain for public sector unions. In fact, the Common Foundation’s political arm was one of his biggest funders during his re-election to the State Senate. In the gubernatorial race, they and their billionaire funders will certainly be supporting Mastriano over Democrat Josh Shapiro. The Inquirer’s very own Editorial Board wrote that they were unable to endorse any Republican candidates for Senate or Governor in Pennsylvania because they were not “operating in the same reality” as those of us who believe Joe Biden won the election fair and square. So why does the Inquirer give a weekly slot to someone whose organization shares the vast majority of political opinions (and donors) as these candidates?

Ms. Stefano of course has a right to share her political opinions in the paper, but it’s important to note that the Commonwealth Foundation already has an outsized influence on our politics—it’s not like she is just an average voter, or that her employer is a tiny or volunteer civic association. She and the Commonwealth Foundation are part of a network of national right-wing organizations that work to pass conservative policies – and now they appear to have a weekly opinion column in our paper, with no announcement or explanation. The Inquirer has a responsibility to its readers to be honest and transparent about any relationship, financial or otherwise, that they have with this organization.

Mindy Isser writes from Philadelphia and is a labor journalist and organizer who appeared in The Nation, Jacobin, In These Times, and in the Philadelphia Inquirer.