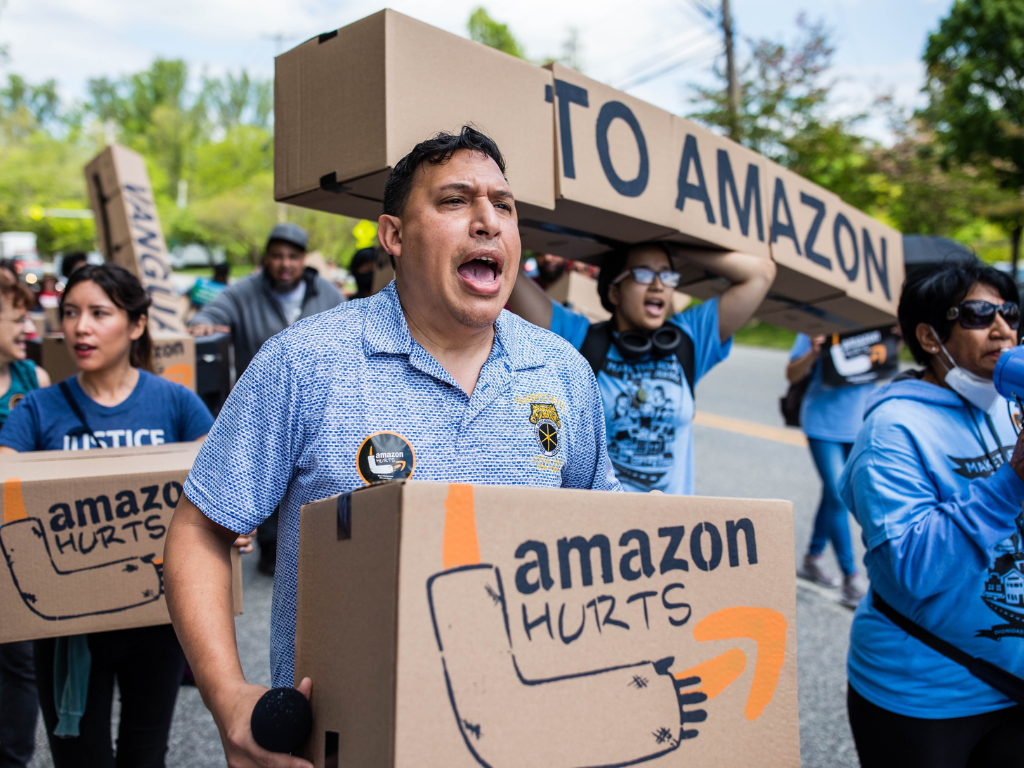 Dozens of members from the Athena Coalition gathered outside the Vanguard Group Headquarters in Malvern, Pennsylvania last week demanding accountability at Amazon warehouses. The coalition is made up of over fifty organizations and the group outside of Vanguard included members from the Earth Quaker Action Team, Make the Road NJ, POWER, and the Teamsters.

The demonstrators are targeting Vanguard ahead of Amazon’s annual shareholders meeting later this month because the investment firm is Amazon’s largest shareholder and has been silent on issues affecting workers and local communities.  Daniel Olayiwola, an Amazon fulfillment center worker from Texas, will be the first Amazon employee to present a resolution during an Amazon annual meeting.

According to the Athena Coalition, Olayiwola’s resolution “seeks to end the injury and turnover crisis by halting productivity quotes and worker surveillance practices.”  Olayiwola stated, “Amazon’s use of productivity metrics and constant surveillance, monitoring, and fast pace of work is directly responsible for high injury rates at Amazon and for the grueling working conditions that put our mental wellbeing at risk every single day. I feel like I am stepping into a sweatshop every time I clock in, where I am treated like a robot rather than a human being.

In order to ensure the health of its employees, and to meet its commitment to being the ‘Earth’s Safest Place to Work,’ Amazon must let workers complete our tasks at a safe pace, free from second-by-second monitoring.”

Speakers also took the time to address Amazon’s partnerships with the federal government’s surveillance apparatus.  Aly Panjwani from ACRE called Amazon “the sponsor of state violence across the world” saying that 86 percent of their contracts with the federal government are with agencies central to the war on terror.  Panjwani later cited how the Los Angeles Police Department used Amazon’s Ring doorbell system to spy on Black Lives Matter protesters.

Demonstrators attempted to enter Vanguard’s headquarters with their resolutions calling for accountability but were denied by security.

Our reporting is a free resource, however, if you value the information and. news you receive via Pennsylvania Spotlight, please donate $5 or more today to support our work.